Day one started off simple. The sun was shinning and I got up at silly o'clock, loaded the car and headed for Doncaster. After a bit of food shopping with my mum, I added her luggage to the already half filled saxo and we set off to Skegness.

Two hours later we arrived at Butlins and met up with everyone else, Mona, Amanda and Paula. It was clear that everyone was excited as we had all over packed just a little. All except for Amanda that is. Not even sure if she'd packed anything at all. Once we got into the apartment, all the rooms were assigned and the cupboards were filled with the crazy amount of food we brought, and not forgetting of course, Amanda's giant tin of soup.

Once unpacked, we ate hog dogs and the drinking began. We headed out in search of the bars and found a Blondie tribute act performing on the Centre Stage, so we found a table and set up camp.
Drink after drink after drink after drink. The alcohol came in so fast we were soon hammered so we headed back, some of us on a trolley, and with the urge to eat pizza. 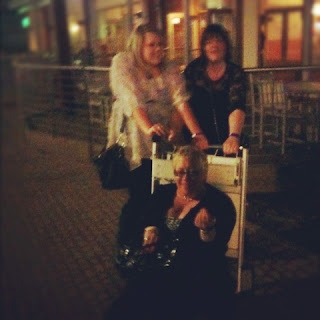 Now, the problem with cooking pizza when you've been drinking is that not only does nobody know how to work the oven, but one particular person kept switching the oven off. Oddly enough, pizzas don't cook too well when the oven isn't on.

After giving up on the pizza it was bedtime. Sleep was going to be needed if we were to survive the next three days.