Every day someone asks me the same question: "How are you?". My answer is always "I'm good, thanks"

Sometimes this is true.

Sometimes this is a lie.

I've been open and honest about my mental health for the past 2 years, but even now I find many situations where I don't feel it is appropriate to blurt my feelings out to a co-worker or an acquaintance.

I often worry that oversharing will make me sound repetitive or boring. This can make the day difficult to navigate, especially when I'm feeling down. On many occasions, I will claim that I'm tired (which I usually am) or I'll appear to fixate on a minor issue that the people around me will understand without too much explanation. It's a fine line to walk though, as I don't want to look like I'm making a big deal out of nothing.

Sometimes the truth is just difficult to share. Not because its private (although this can be the case), but because its hard to explain. How do you describe feelings of emptiness or escapism in a one-sentence response to "How are you?"

A big reason for not sharing is simply that I don't believe that the person asking the question actually wants to know the real answer. Nobody wants to hear somebody's life story whenever they ask a simple "how are you?". Plenty of people tell me that they are here for me if I want to talk, and in that moment I believe that they are sincere. But when the time comes, not everyone really wants to listen. Realistically, people do not always have the time.

Wednesday 10th October is World Mental Health Day and the Time to Change movement is pushing their #asktwice campaign, a campaign which, in principle, is a fantastic idea. 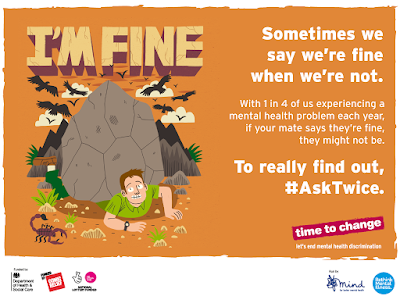 Time to Change are trying to encourage people to ask how someone is multiple times as most people, like me, will claim that they are fine when they aren't. If you're concerned about someone, asking how they are more than once may show them that you are actually interested in their response and you're willing to listen. It's a way of giving that person an opportunity to talk, which is incredibly important.

I can't say for certain that this will always work but it has worked with me very recently and one success is better than the nothing you get when you don't try.

For more information on the #AskTwice campaign, please visit time-to-change.org.uk