It's All About The Eggs

Good morning! Welcome to day three of Butlins.
Once again we all managed to get up bright and early, although some people were slightly brighter than others. Poor Mona was definitely struggling that day. Anyway, after having some very disturbing conversations, my mum decided to have a singing session. Unfortunately, not everyone appreciated her singing and Paula decided to grab an egg and throw it at her. The only problem was the egg was stuck. So was the second one, and the third, and after six attempts she finally realised there was something wrong. My mum had superglued all the eggs to the box! Not only had Paula temporary thought that she'd lost her strength, my mum stopped herself from being egged in the face. Worked out pretty well I think. 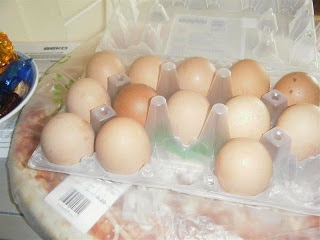 Anyway, once all the eggcitement was over, (sorry, it had to be done just once), and after a number of afternoon naps, it was time for fancy dress number two: The School Girls. 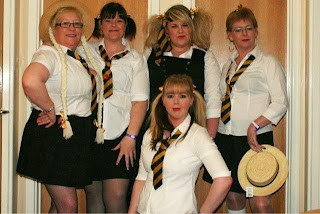 We headed out for the final 70s night and, in typical fashion, we lost my mum straight away. She's got a habit of wandering off. About half an hour of searching later, she showed up with a pint in her hand as if she'd been there the whole time.
After a bit of dancing and a lot of singing, we found a table and waited for the main act of the night to come on. During this time, Mona seemed to be receiving a lot of hate texts calling her a twat. Naturally she blamed us but none of us seemed to know what was going on. It wasn't until later at the bar that Mona discovered the cause of all the texts… 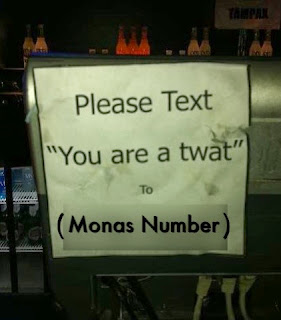 THAT was where my mum had been at the beginning of the night!