Welcome to the final, and much shorter part, of my Thailand blog. It's been nice writing about it and it's amazing how much it all comes back to you, even two months later!


Back in fumy, hot Bangkok.
The temperature difference between the different parts of this country was amazing. I never noticed it too much after leaving Bangkok, but when you come back it really hits you. It was absolutely sweltering and just not nice heat. It was even worse when you were trying to get anywhere. It was definitely back to city life again. 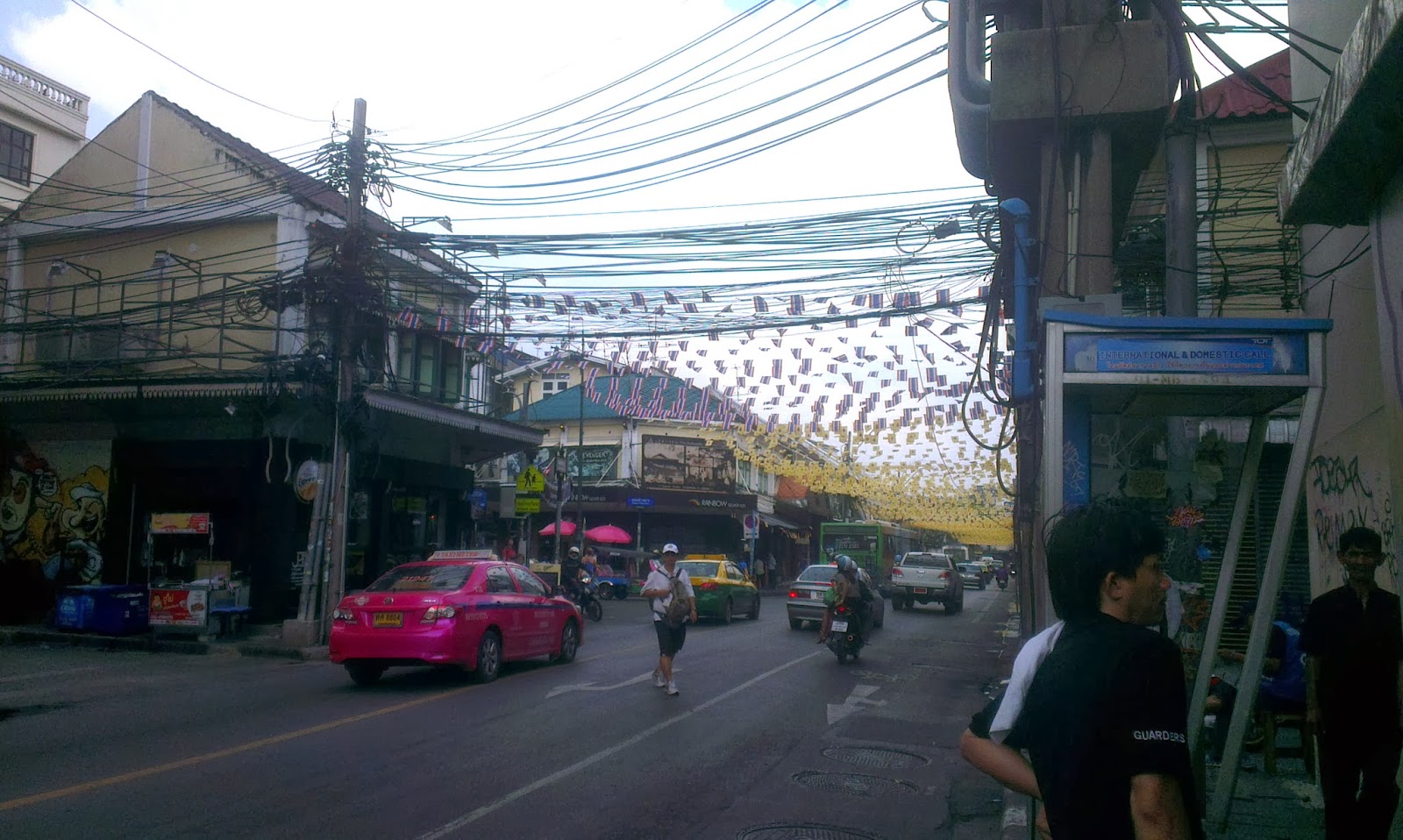 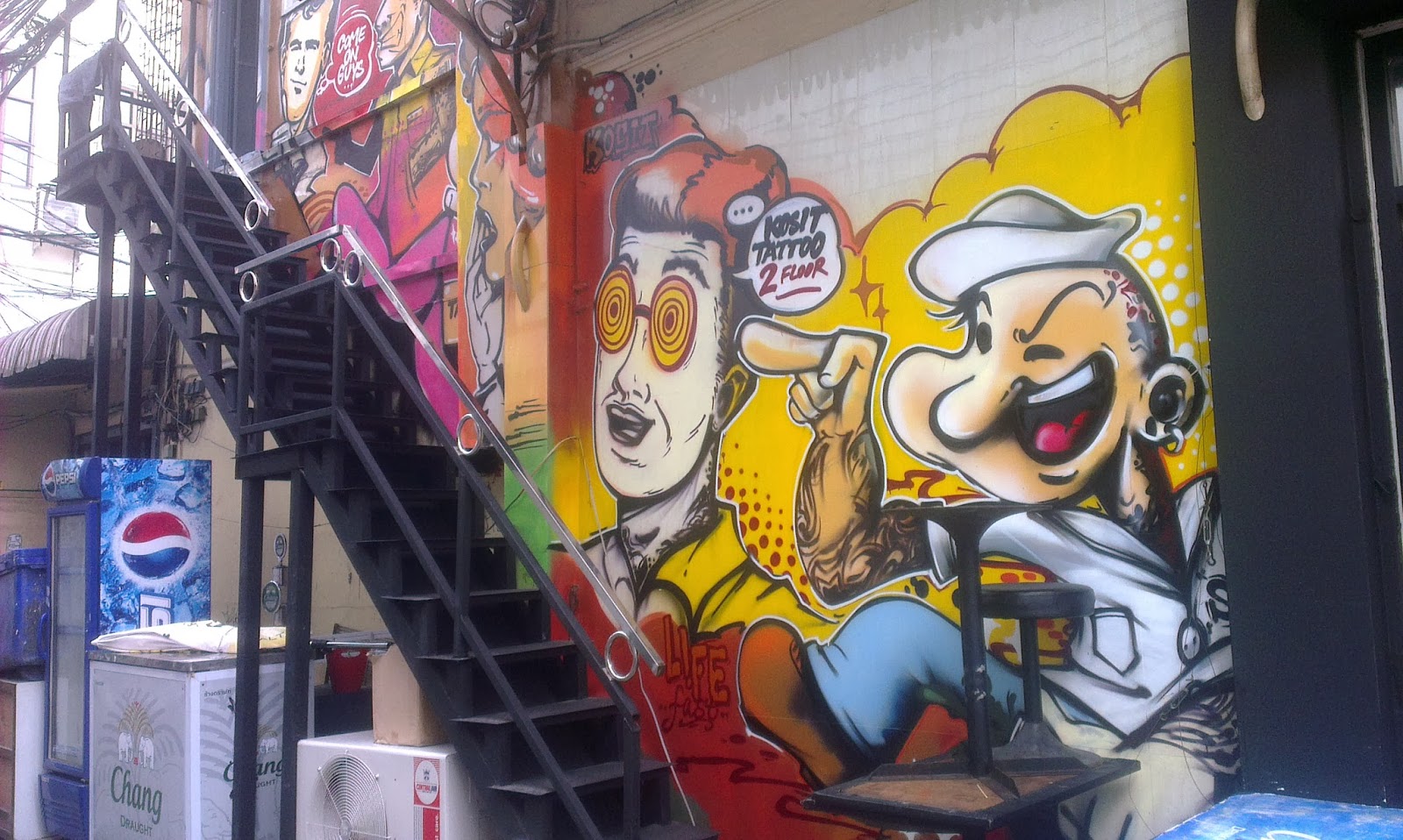 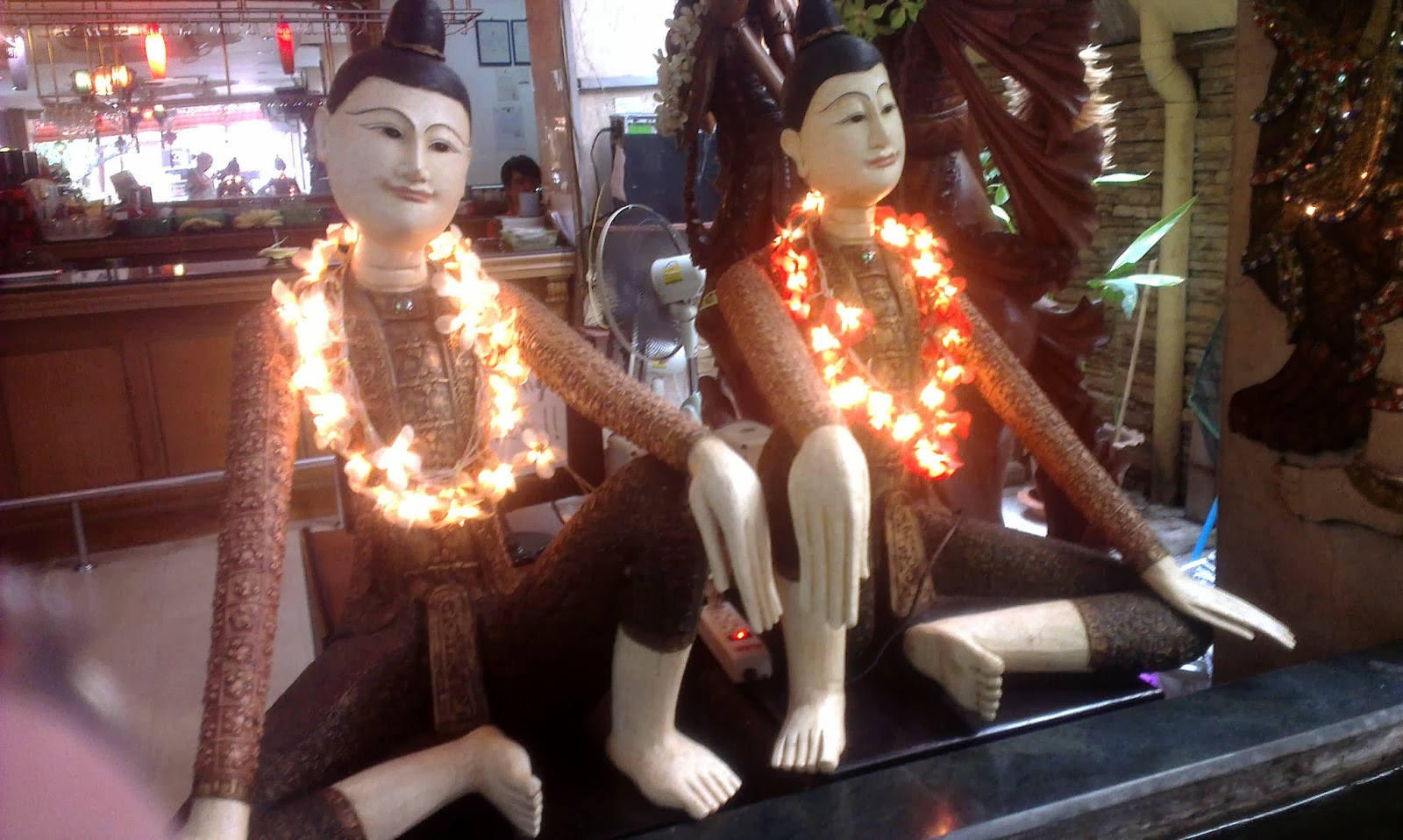 This poor taxi driver. He has a dodgy GPS, no credit on his phone and no petrol. He's so nice too!
We find a taxi outside of Bangkok airport, and after bartering the driver down from about £10 to £4, we get into in the car and head towards our hotel. This was the first time during our three weeks here that a driver actually tried to hold a proper conversation with us, and he was really friendly. He was telling us all about the 'Mob' and the reasons behind it. He also told us about his wife and kids in the country, and how he doesn't see them much because he was in the city working. It was all very sweet.
Because of all the protest disruptions, many roads were blocked, causing our poor driver to get lost. His GPS kept crashing and restarting and he couldn't even ring our hotel to ask for directions, as his phone was out of credit and ours didn't work in Thailand. I felt really sorry for him, especially as he was apologising for it every few minutes. During all this, we noticed his petrol light was on too! He really wasn't having a good day and how we got to the hotel I'll never know, but it did involve him leaning out of the car and asking passing tuk tuk drivers for directions! We felt a little guilty for bartering with him originally, so of course he got a little extra. I would have bought him a new GPS if I could have!

That's the 2nd biggest Buddhist statue I've ever seen!
Thailand had Buddha statues and pictures everywhere, but I hadn't seen anything on this scale before, especially for sale! Sadly, it was illegal to take him home with me. Shame. I though he would have fit very well in our bathroom. 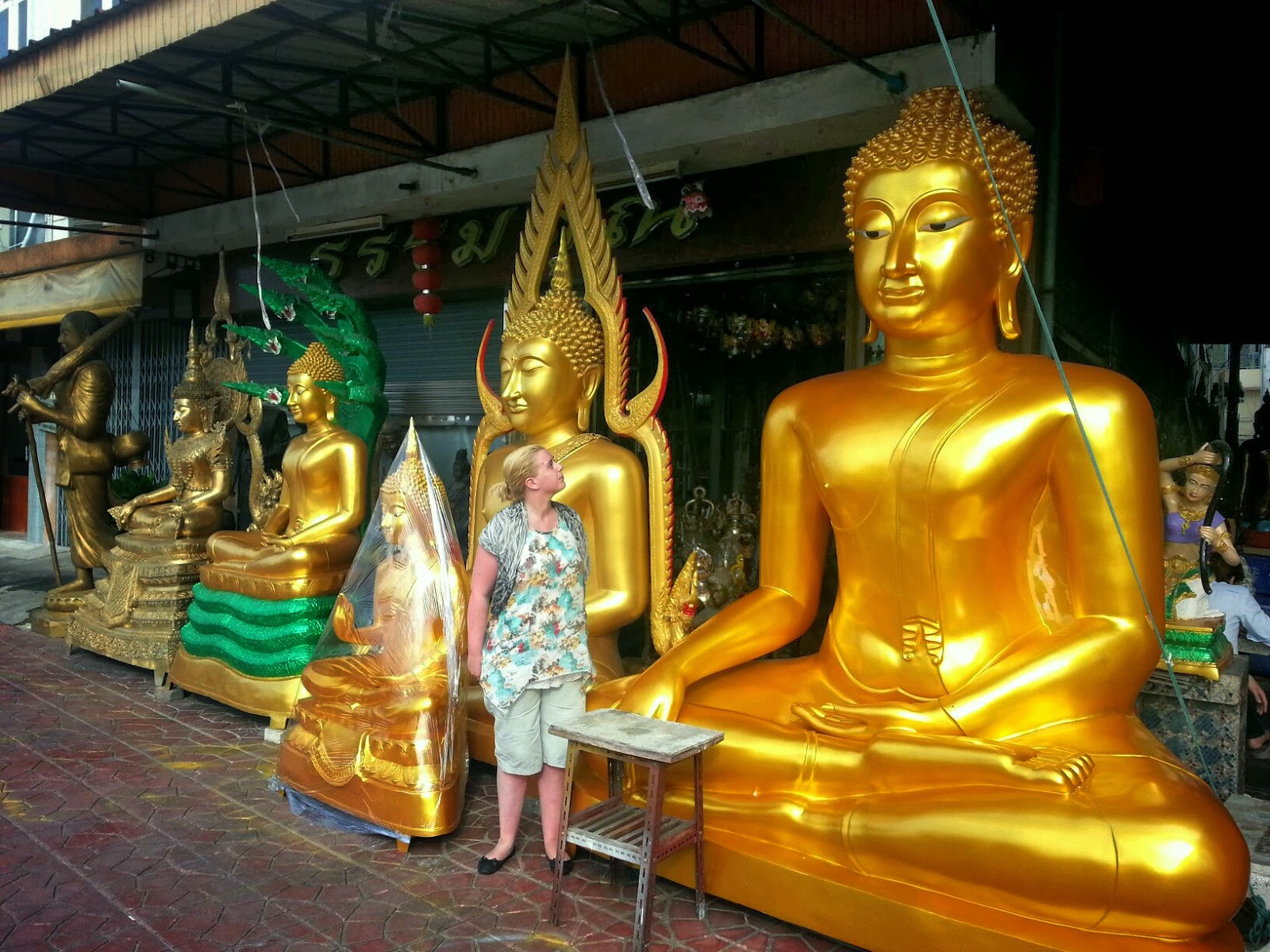 80 baht (Approx £1.60) for noodles, 260 baht  (£5.50) for orange juice! Oops!
I can't believe that at this late stage in the trip, we managed to not ask the price of the juice before we ordered it. Here was us expecting a nice low bill. How wrong could we be? No wonder people were looking at us funny whilst we were downing those drinks!


Last day in Thailand. I'm sad!
This trip has been absolutely amazing, so it's no wonder that the last full day in Bangkok made me a little sad. Mike won't let us stay any longer, which personally I think is just mean. Still, I got to have one last cheese sandwich before we left. It looked good, but it tasted awful. Maybe is was time to leave after all. 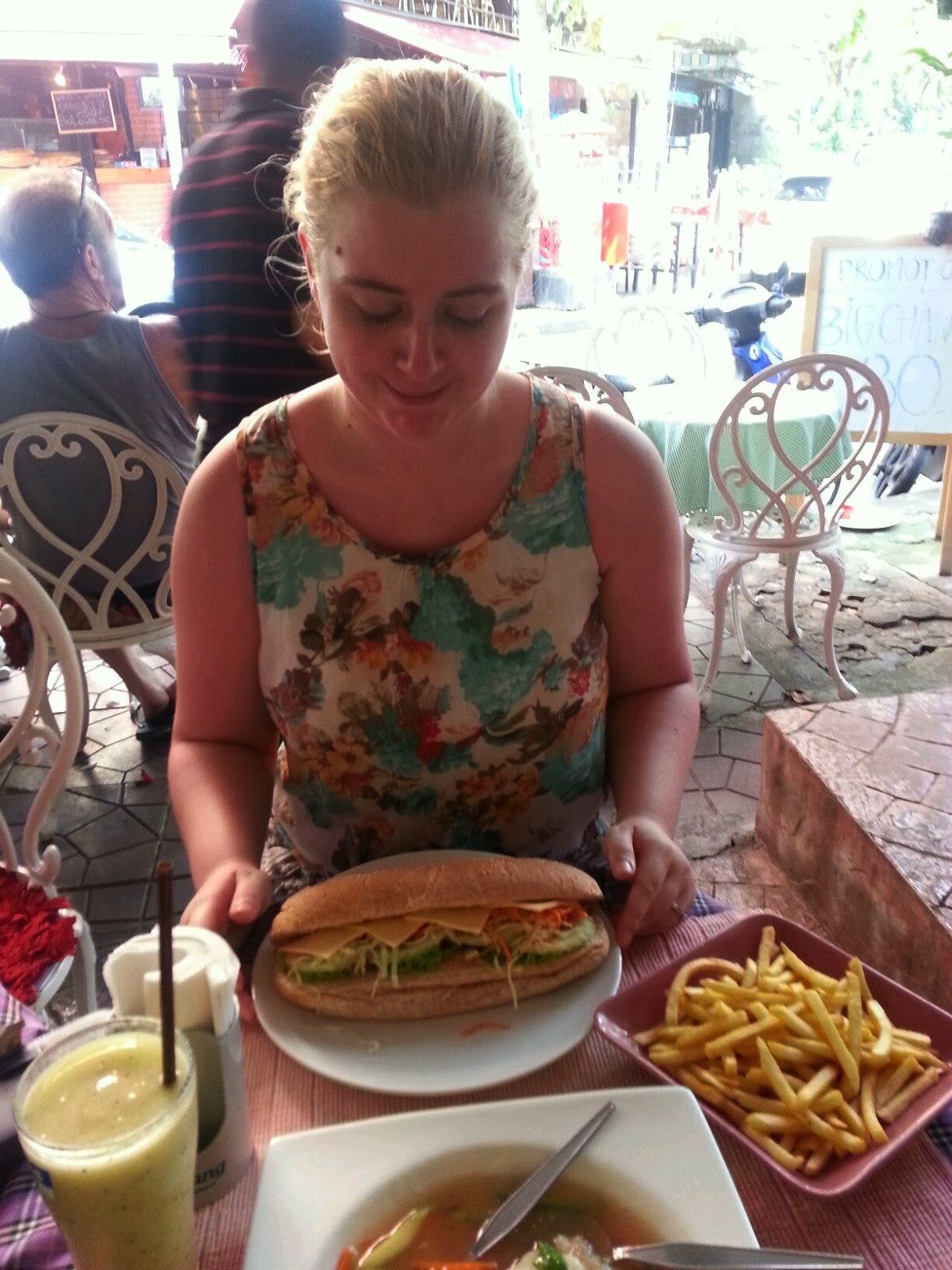 Right in the middle of the anti-government protests. This is the 'mob,mob,mob'.
Thanks to our lovely taxi driver, we now understood what a mob was. It was an anti-government protest. Basically, they had been protesting about the fact that the new Prime Minister Yingluck Shinawatra's brother had been previously kicked out of parliament (or something) and that they didn't want him back so getting rid of her was the best thing. It turned out that the majority of Thailand didn't share this belief and thought that she was actually very good for the country. The whole thing was very peaceful and felt like a giant community festival. (Sadly the protests are still going on and the peaceful theme has not continued). 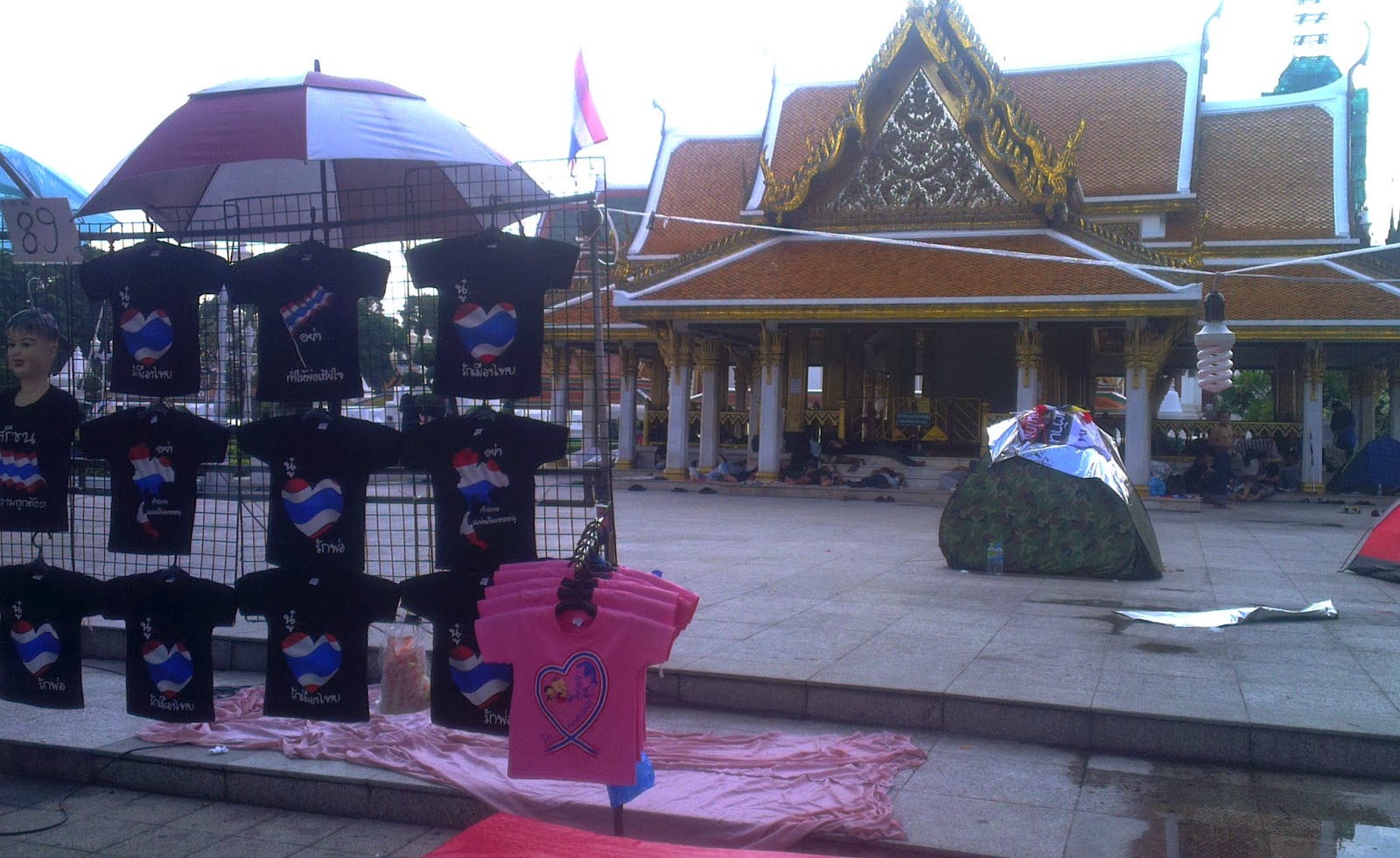 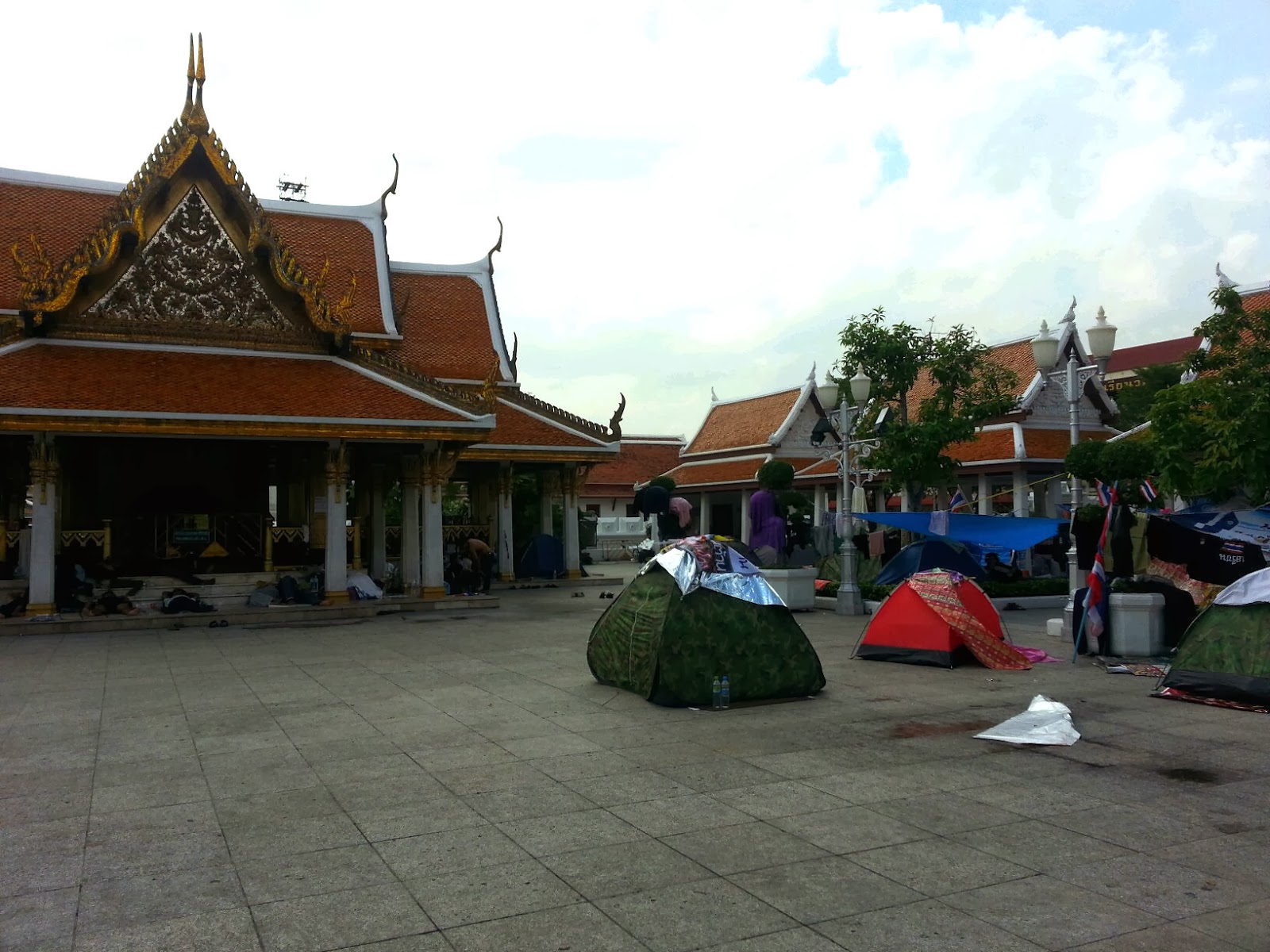 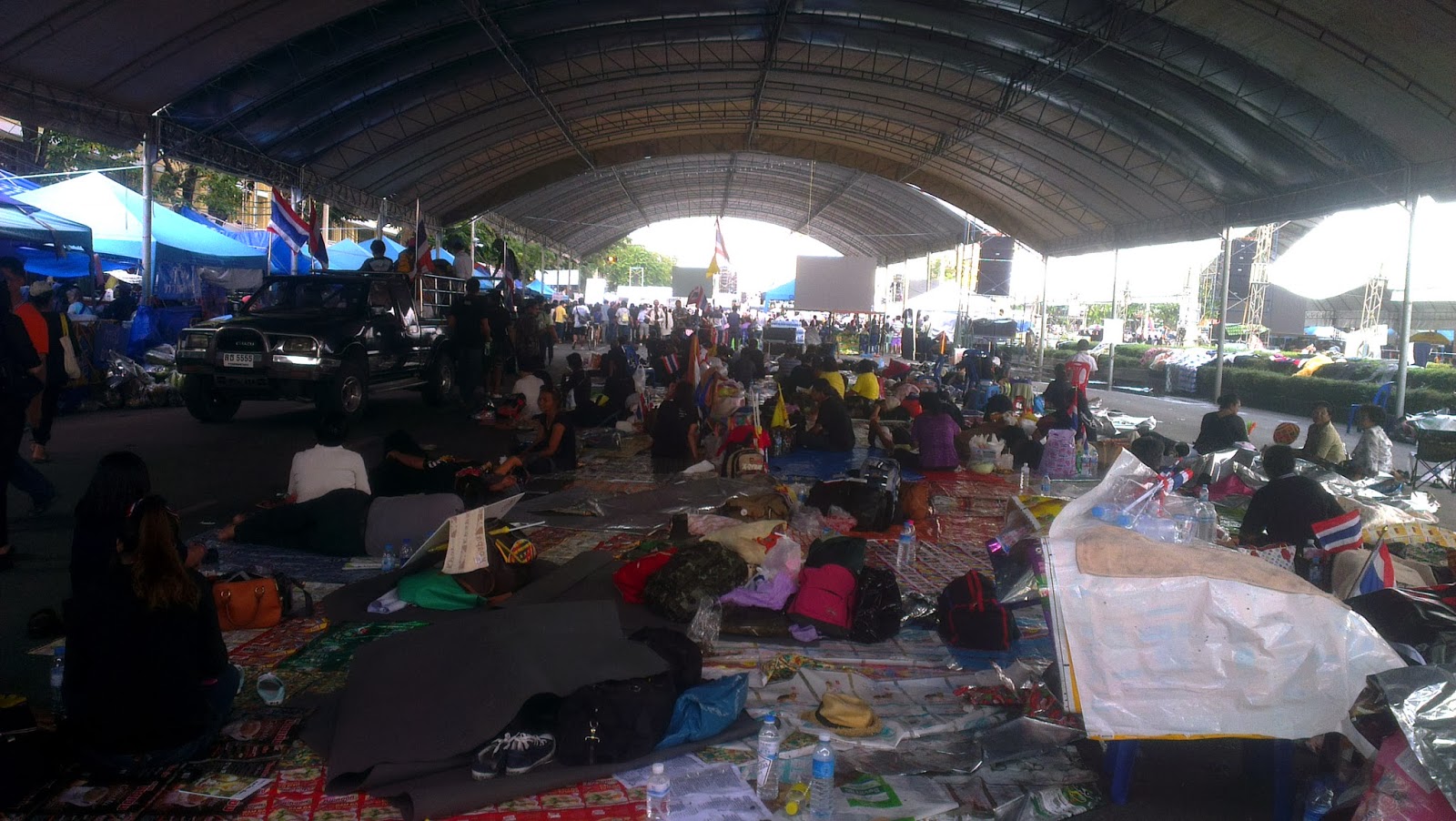 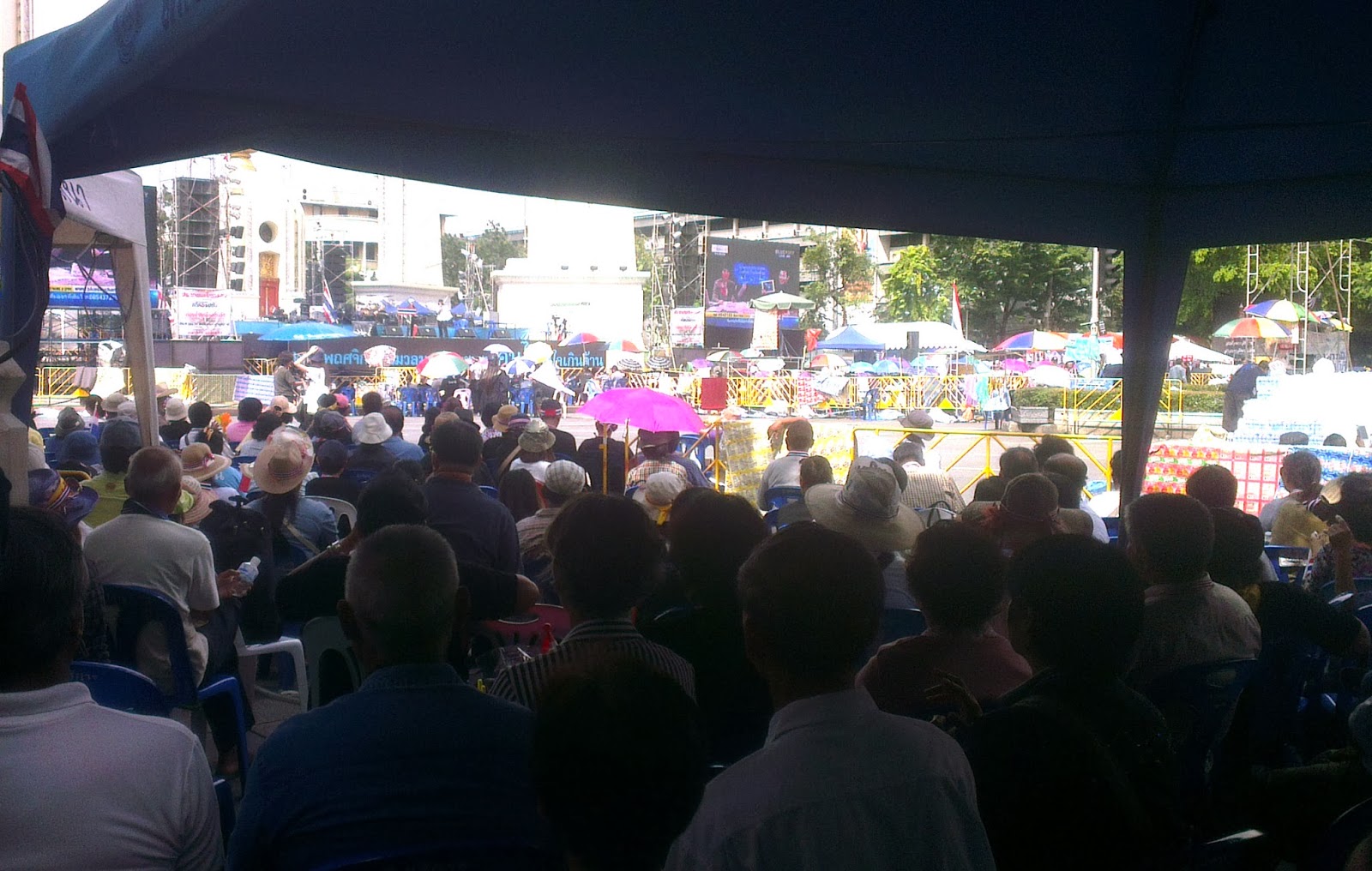 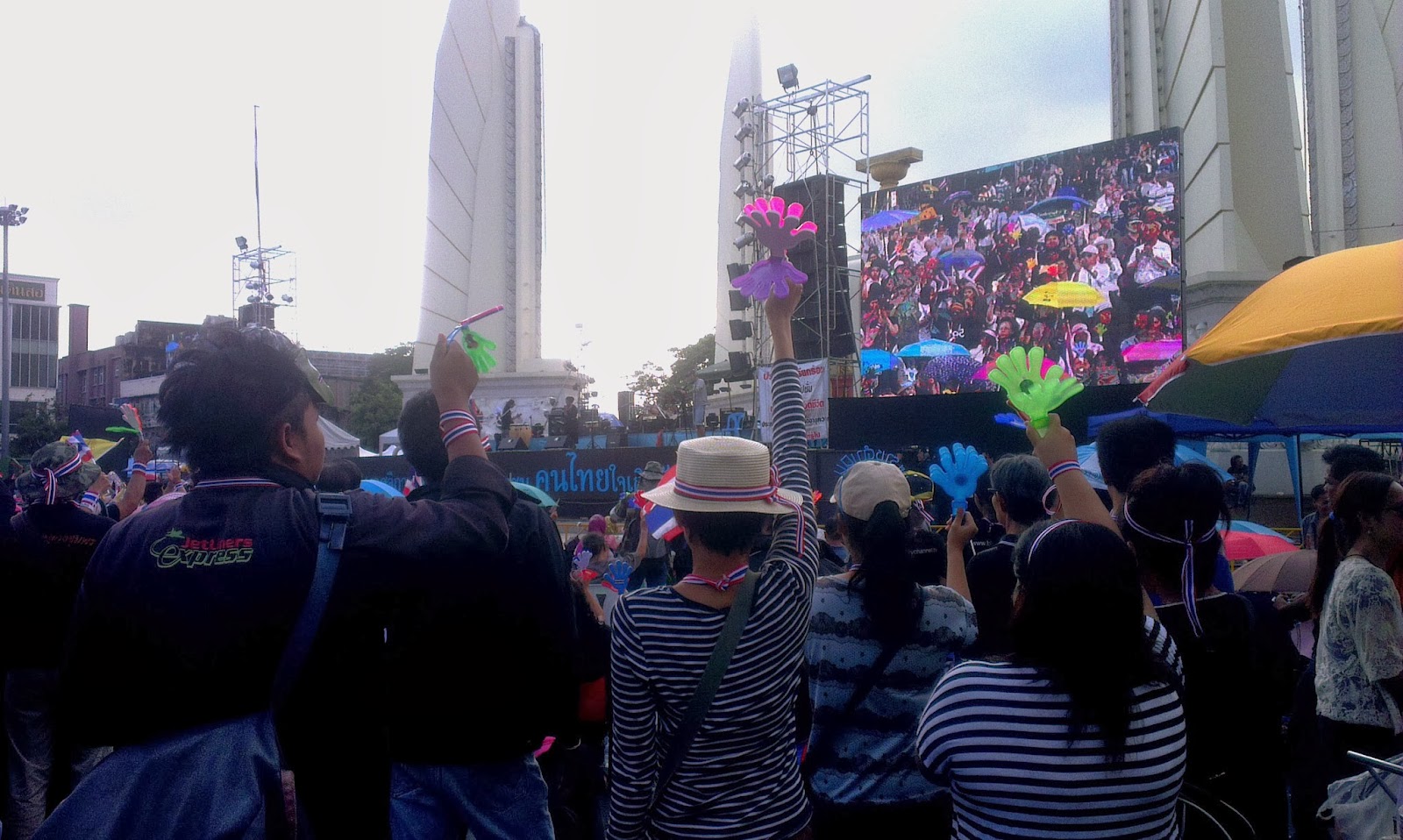 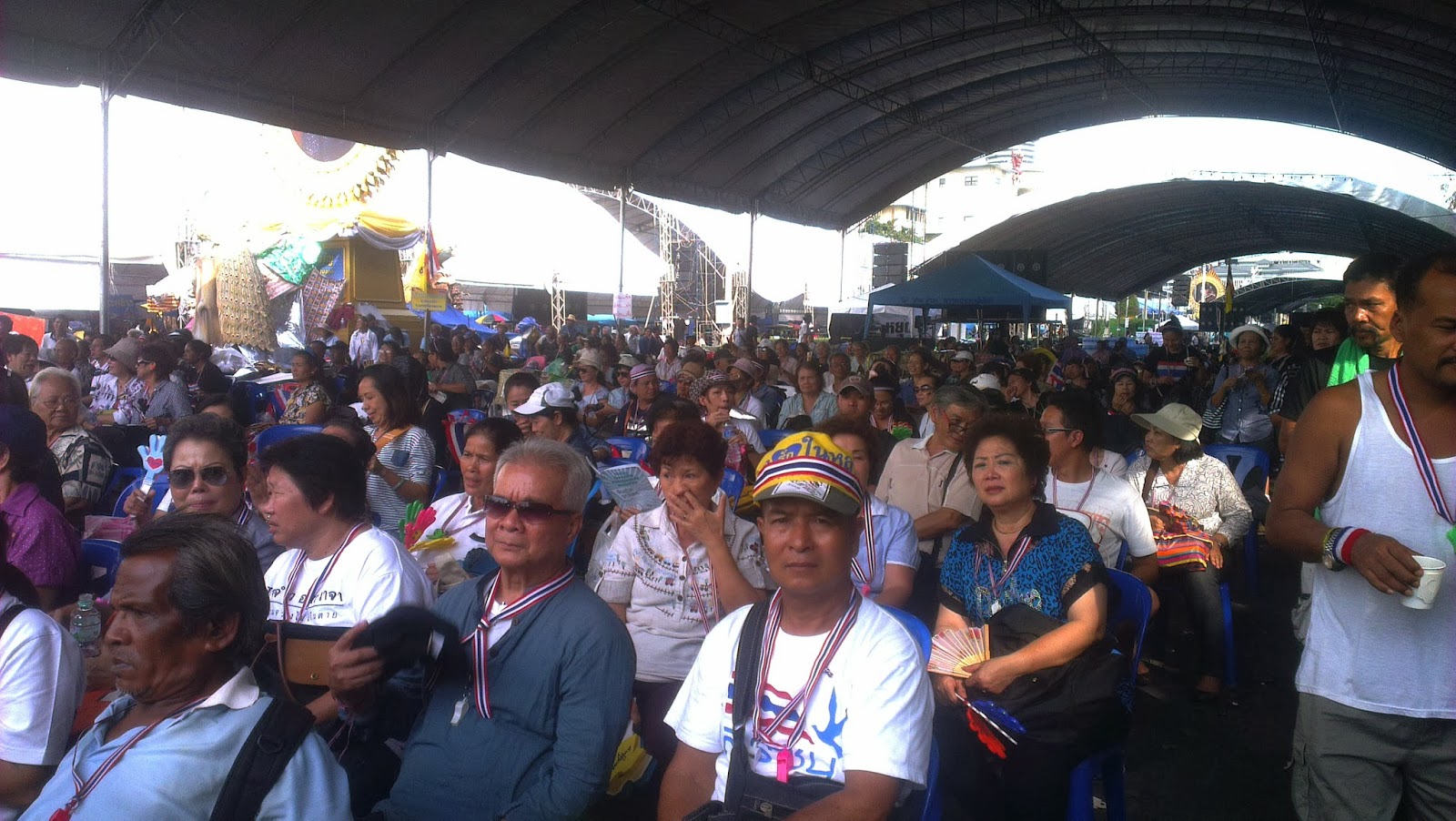 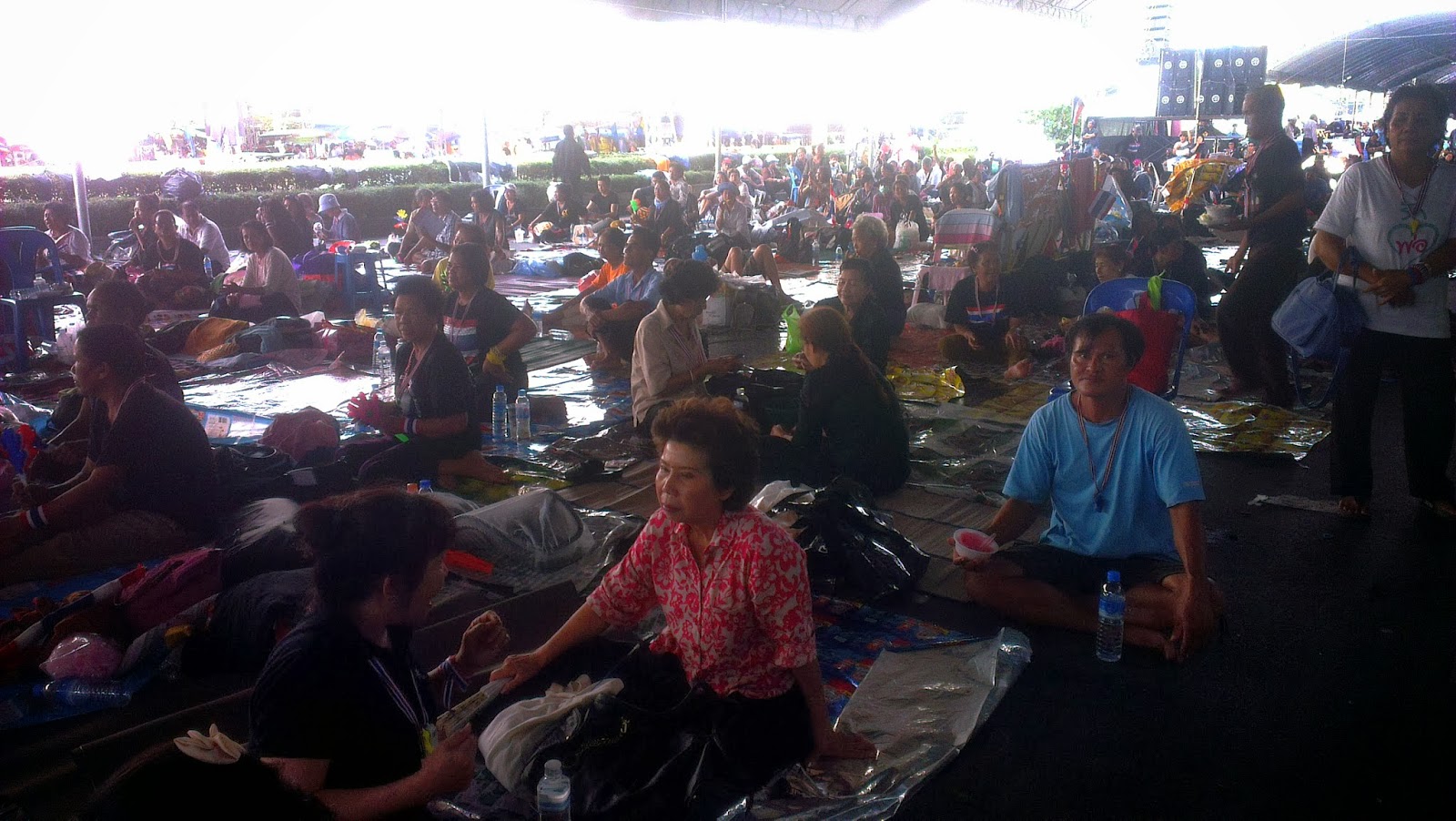 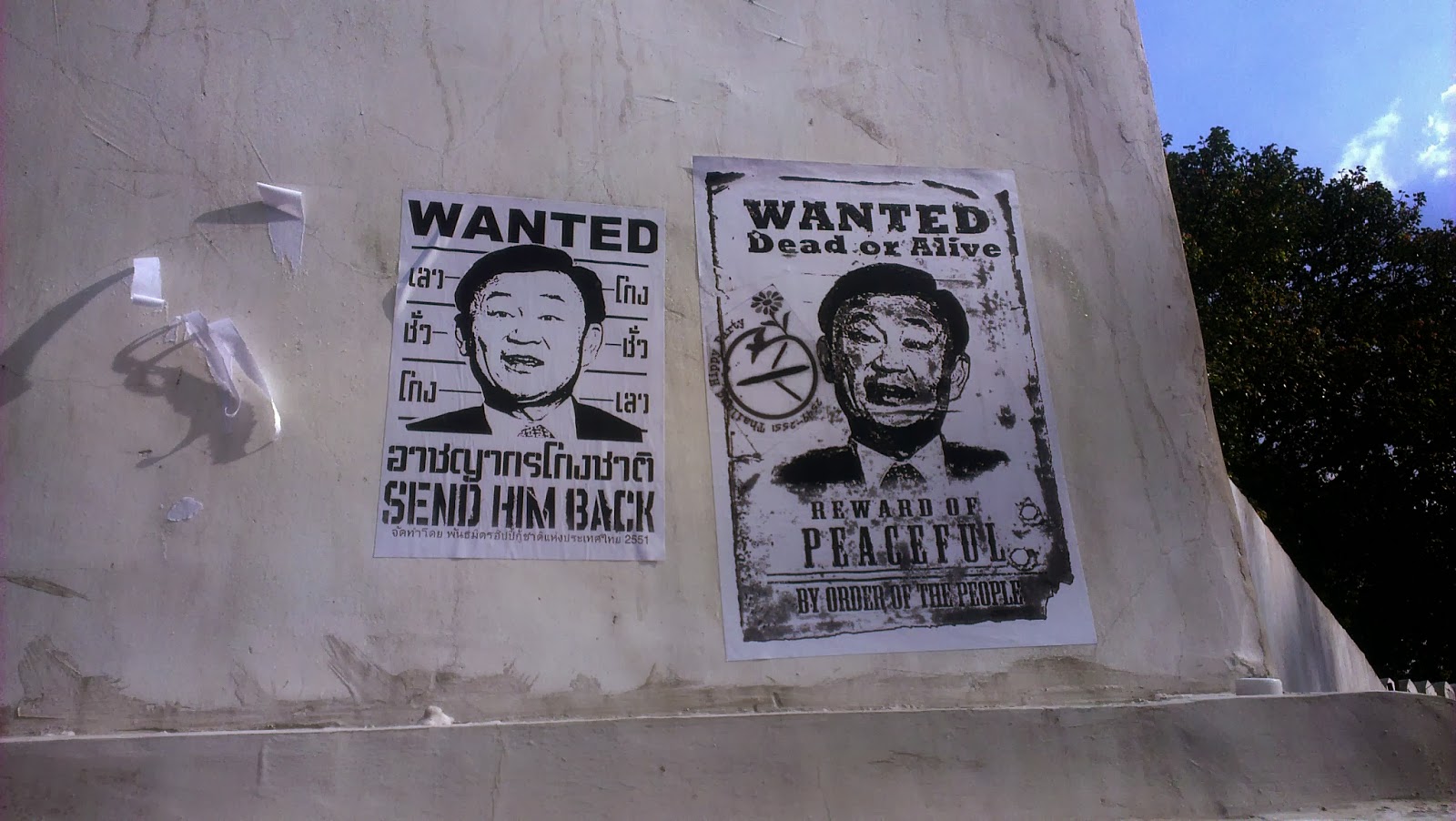 Dear England; This is how you do a protest! Amazingly organised. Disruptive, but legal!
During the time that we were in Thailand, the protests were very civil and peaceful. They caused as much disruption as possible, without anything getting violent and out of hand. Unfortunately this is not the case any more as many people have been killed and injured since we visited, including the leader of the anti-government protests, Suthin Taratin, who was shot in the head only two days ago. (Read all about it here: http://en.wikipedia.org/wiki/2013%E2%80%9314_Thai_political_crisis)
Before the violence though, the protests were like being part of a huge family gathering. There were food tents and water stalls giving out free supplies to everyone, including us. There were also loads of tents around where people were sleeping in order to stay in the area. Having said that, the noise was so incredible I have no idea how anyone could sleep! 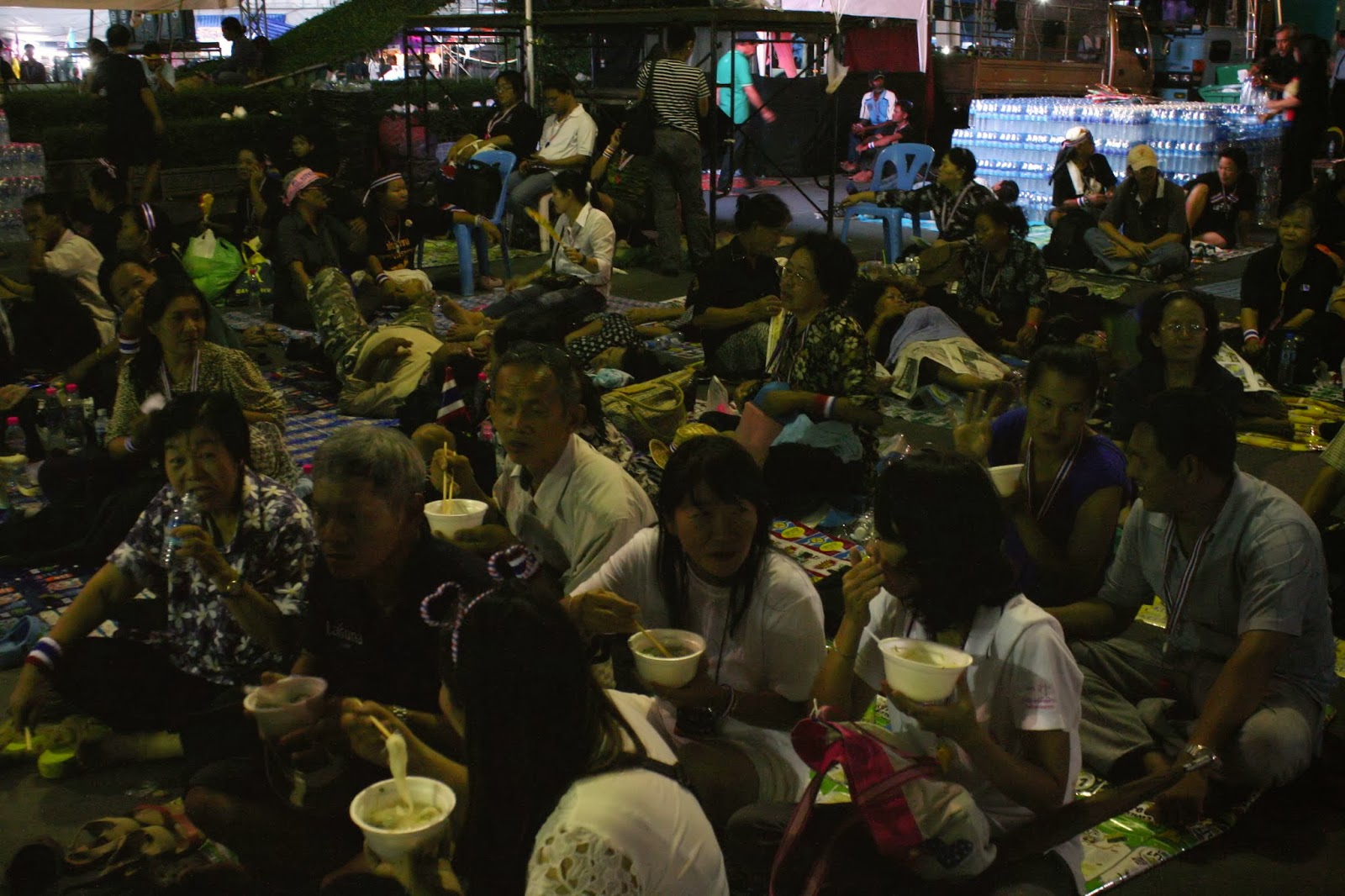 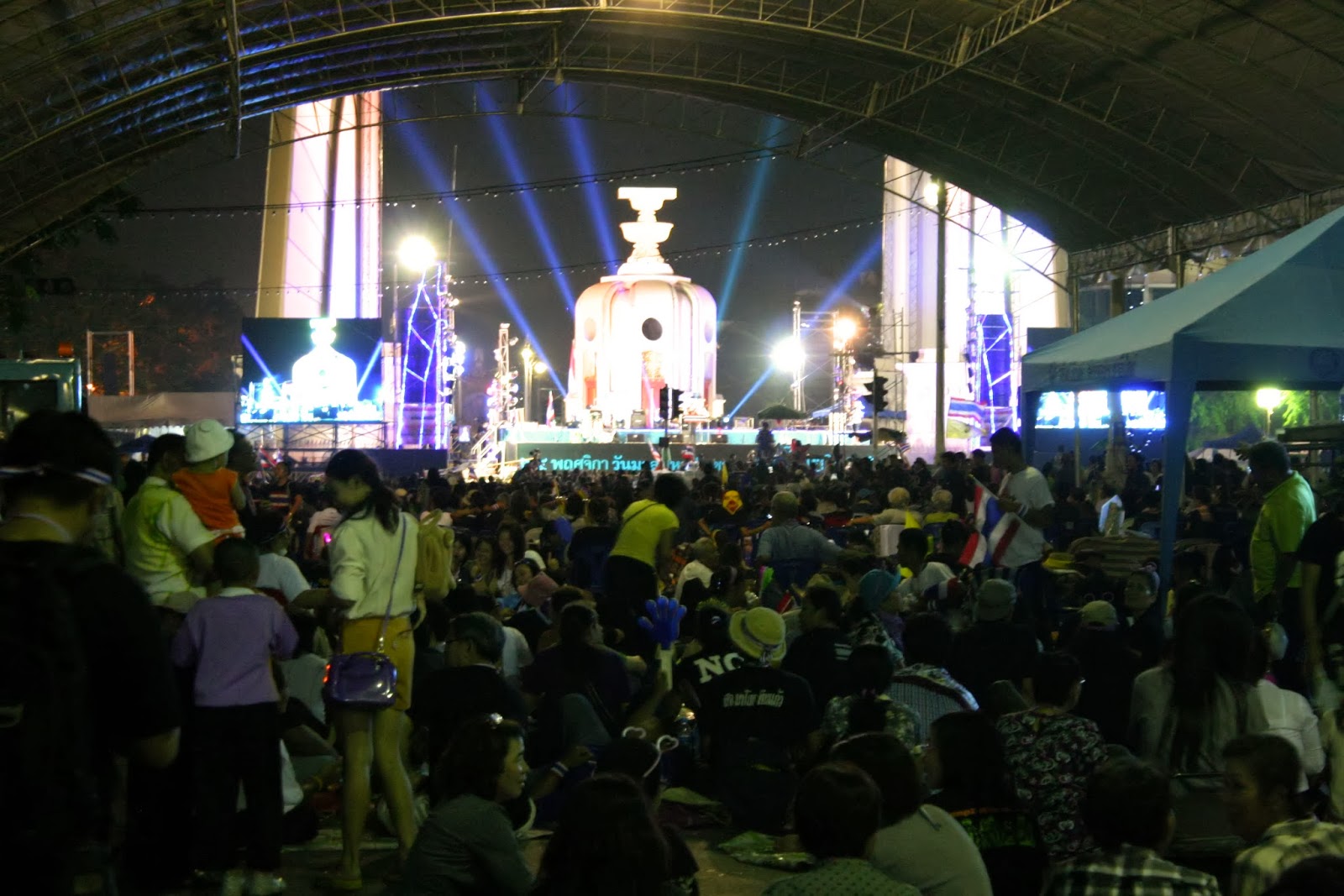 We must smell really nice since every waiter seems to take it in turns to hover over us.
We managed to fight our way through the Thai crowds and find some place to eat. As this was the last night, we were on a very limited budget for food. The first place we went to, though it looked nice, was the most expensive restaurant we had come across during our entire trip! Though difficult, we managed to slip out an run away to find a cheaper option. We sat down in a little place and since it was our last night, tradition Thai food was definitely on the menu. Not only were they the cheapest meals we had come across, they were also possibly the nicest. The only down side was the staff seemed to take in it turns to stand guard over us while we ate. They were even stood over us while we were choosing what to have. It was all very uncomfortable. Of course, the old lady street seller with her noisy wooden frog that was stood directly behind us didn't help either. I could feel her eyes staring into the back of my head! 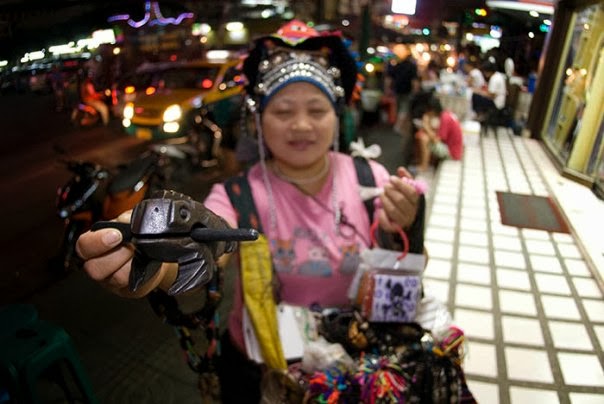 
Last every tuk tuk ride!
When you know you're leaving a place, probably for good, then you do get a little nostalgic over certain things. Last night in a hotel, last cheese sandwich, and even though it cost a little more, one last tuk tuk ride! 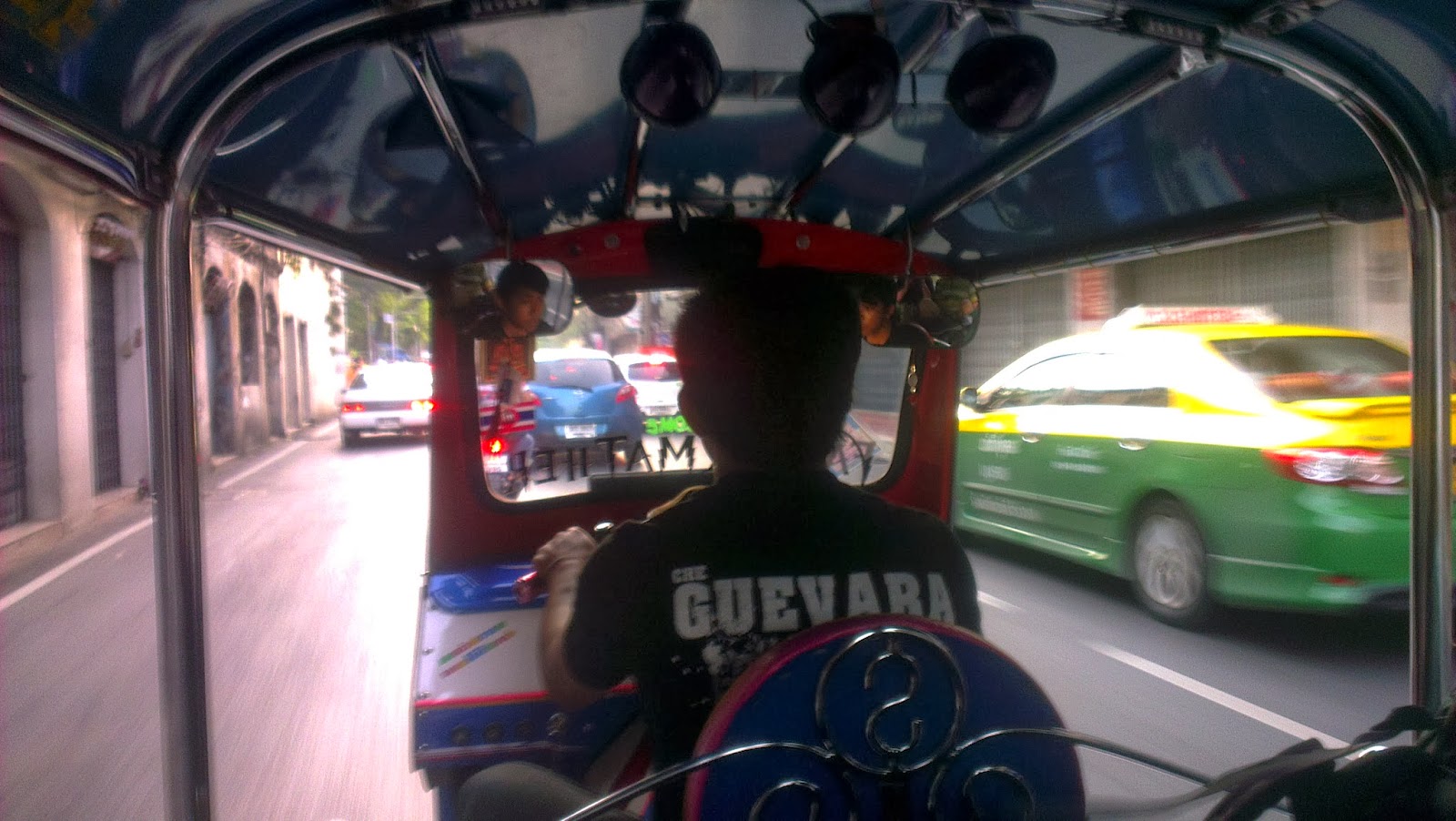 Back to Bangkok airport for our 16 hours of travelling home. Boo!
This is the last view of Thailand that we get. Just us sitting at an airport window waiting to go home. Even the awesome selection of films on the flight won't make me feel any better. Goodbye Thailand. You have been great! 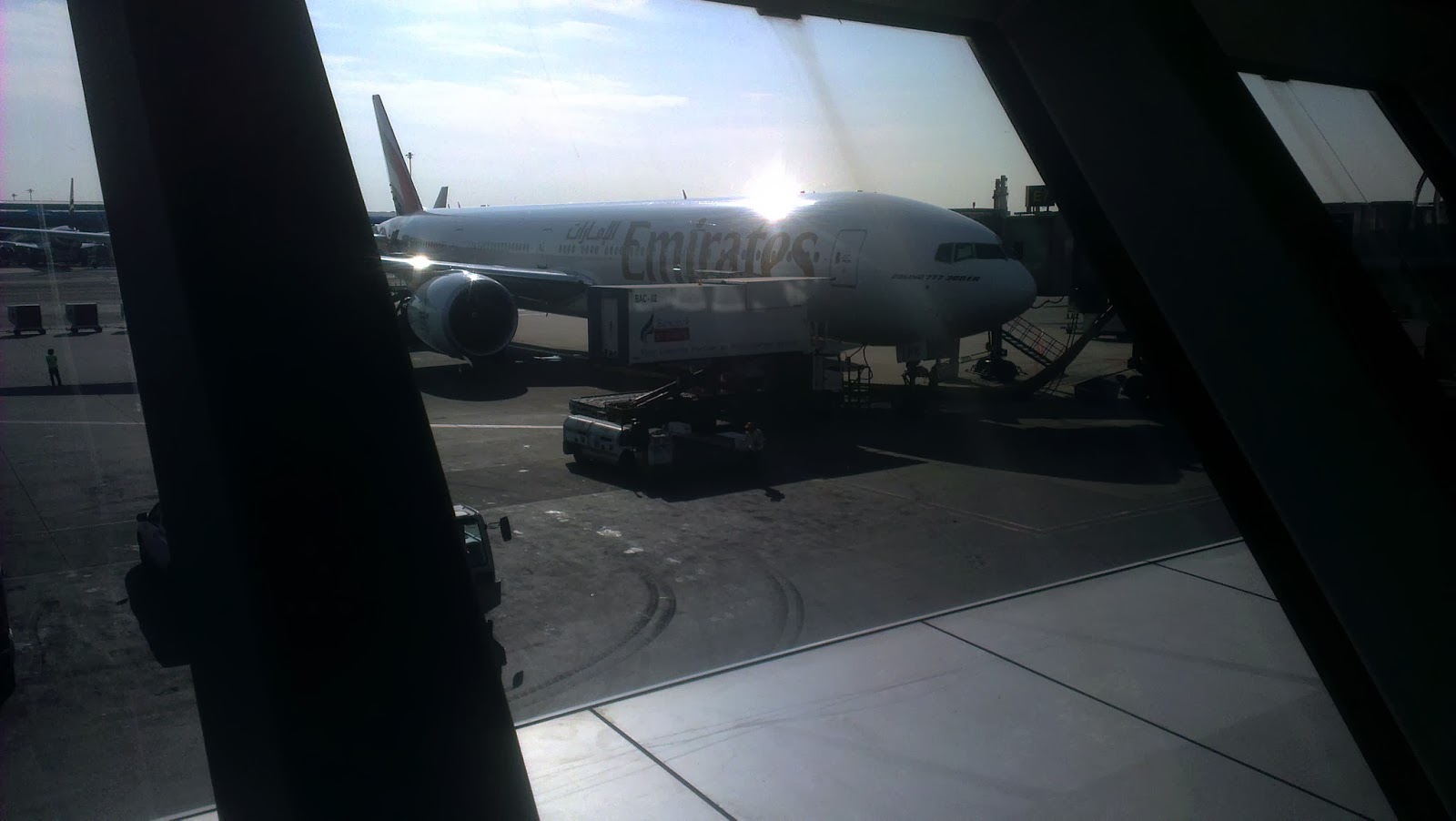 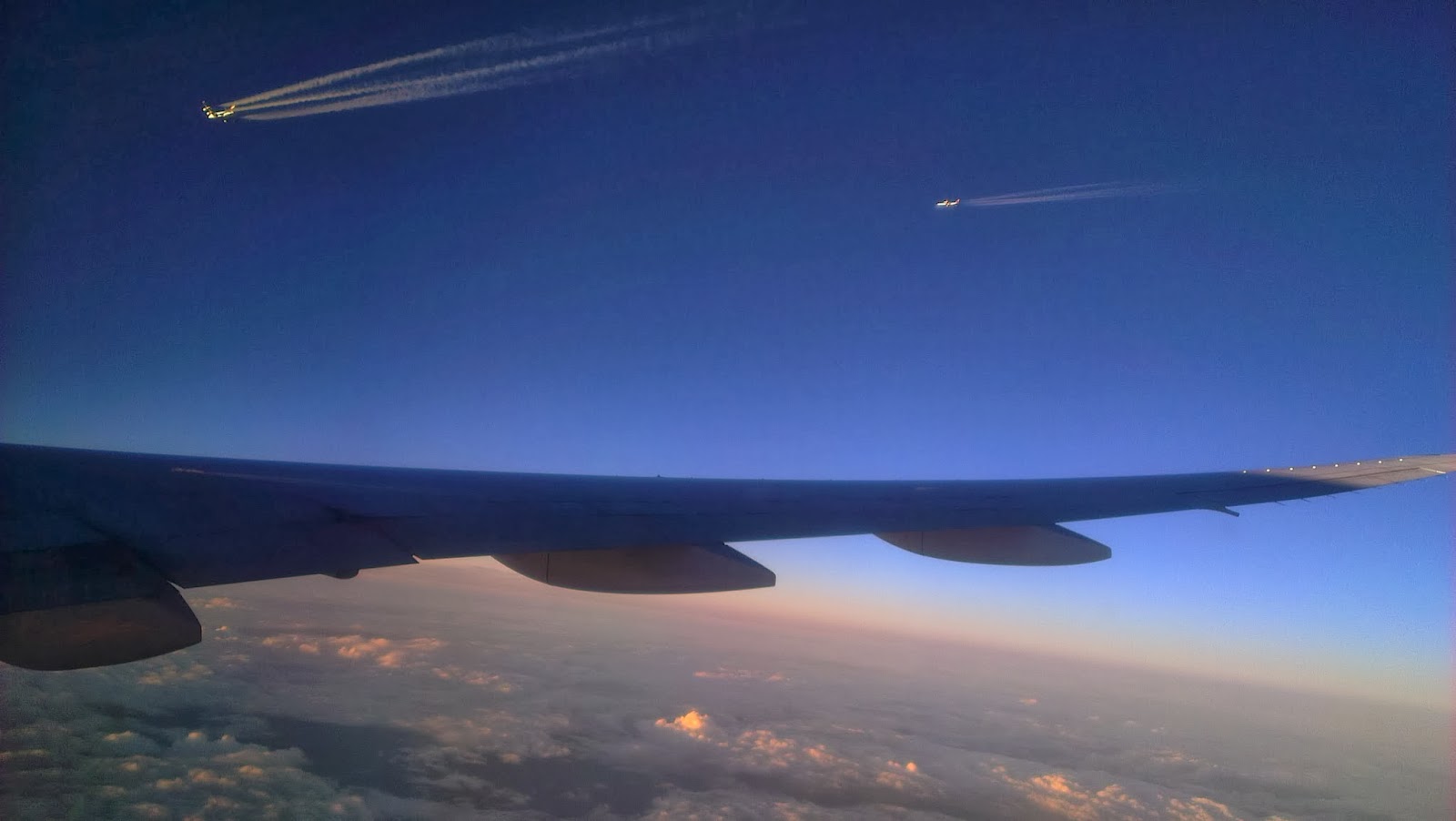 We ordered a vegetarian meal. This is vegan. Have you ever taste vegan? It's horrible!
Dear god, that food was disgusting. Plane food is never amazing, but this was especially vile. Non of the crew seems to understand the differnce between vegetarian and vegan, or why we were complaining. To be honest, we just wanted the cheese and crackers that everyone else had. This was no cheese, no butter, and just no good! 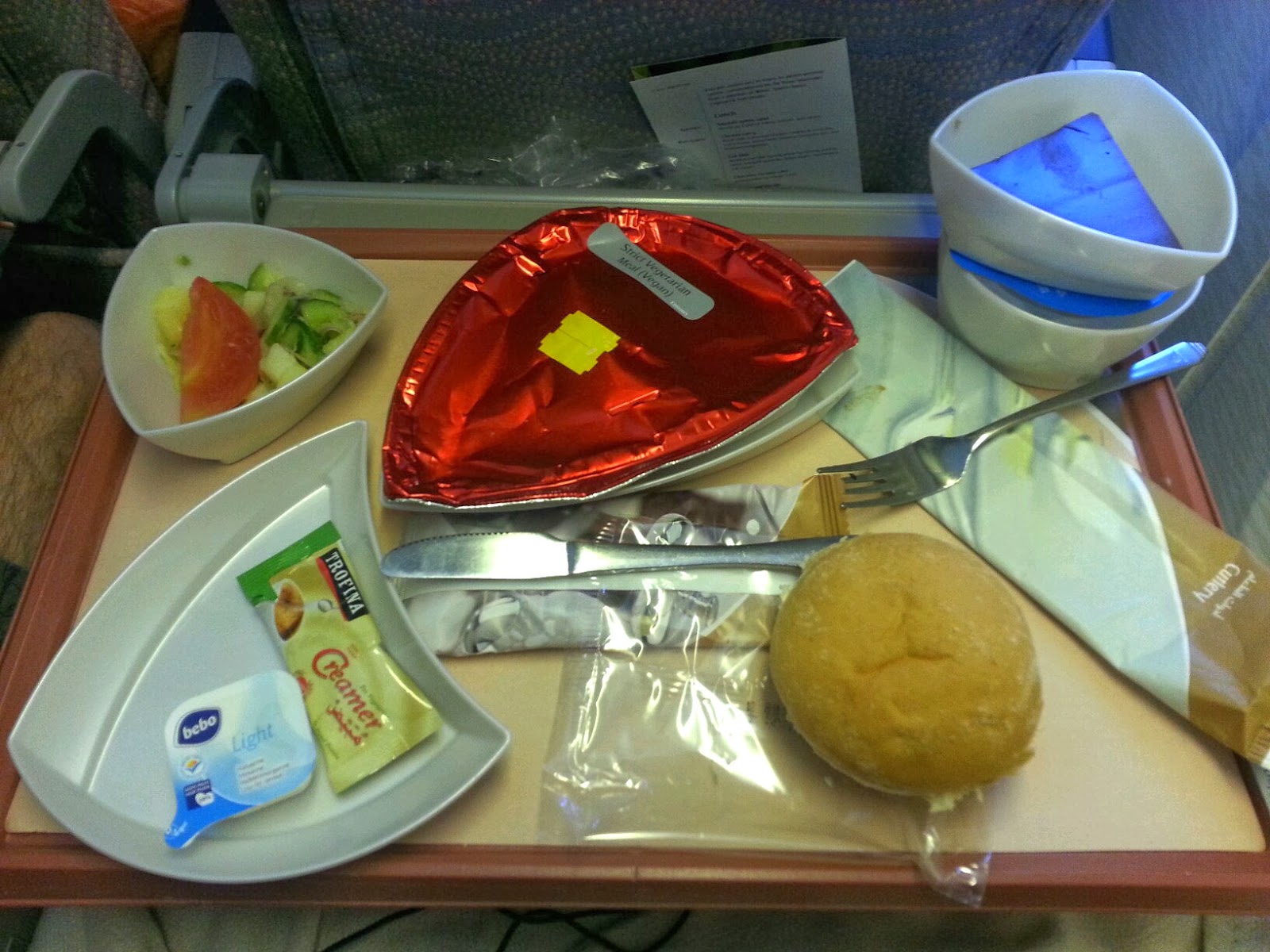 Really? Did you just 'tut' me for going to the bathroom?
I am a polite person, so when I am sat at the window seat I make sure that I am not getting up and down constantly and disturbing the stranger sat on the end of the row. Unfortunately, this was a 7 hour flight and eventually I needed to pee. The gentleman at the end seemed to be asleep so I waited patiently until he woke up, which ended up being about 3 hours later. By this time I was desperate so I politely asked him if I could get past and apologised for getting in his way. And then... he 'tutted'. Seriously! I had waiting 3 hours so that I didn't wake him up, and he's complaining about the one time I need to stand up during a 7 hour flight. I miss Thai people already, because clearly English people are just rude!


Hello England. You are cold and I am tired.
We had finally arrived in Manchester, and I had almost forgotten that it was November here and extremely cold! Has this country never heard of decent heating in the waiting rooms of train stations?


Holy crap. It's taken almost 6 hours to get home from Manchester Airport. I may die!
Train delays, train cancellations, and re-routed trains all meant one thing; We were not getting home any time soon! Our plane landed at around 6pm in Manchester. We saw Halifax train station at 11pm. At this point I was freezing and very sleepy! Thailand has really shown up your transport system, England!


That's it! All over!
We have fought our way through all the rubbish public transport of England and now we are home. As with any trip, the 'high' you get from travelling stays with you for a little while.

So that is pretty much it. The whole trip and it really was one hell of a holiday. I never really expected any of that and even looking back at it now, it still feels like another lifetime and almost unreal.

Thank you for taking the time to read this, although I suspect this was more self indulgent than anything else! It has given me the motivation to continue this blog on a more frequent basis and although it may not be quite as exciting I do hope you'll stick with me for my future ramblings too!