This year was the big trip to Thailand and I promised everyone I would come back with lots of stories of what we did while we were there. I decided to write about the trip in the form of the status updates (plus description) that I would have written if I had the time/internet connection. This is the first part of the trip which began with a couple days in Bangkok.

Best. Plane. Ever!
This was my first long haul flight meaning that it is also the first non-budget flight (that I can remember) that has hot towels, various meals, and personal TV's. I don't think I have ever watched so many films in a row, and that's including Disney marathons on sick days. It may have been a 16 hour flight, but it wasn't a bad flight at all. 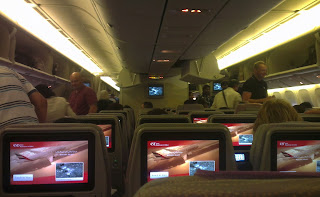 Mot, mot, mot!
We had just arrived in Bangkok and after a very warm and slightly awkward train journey, we jumped into the first Thai taxi of the holiday. It was horrendous. Between the illegal turns, the creation of extra lanes in traffic jams, and the random shouting of what I assume to be Thai obscenities, this was the scariest taxi driver ever. During the journey There were a number of road blocks, which seem to make the driver shout the words 'mot mot mot' over and over again (which we later discovered was actually 'mob'. I'll get into that later). In very broken English he did attempt to tell us what was going on, but to be honest I was concentrating more on not dying on my first day of Thailand! If they were all like this, it was going to be an interesting three weeks. 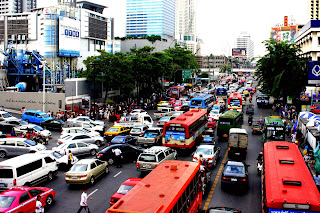 
All checked in to a pretty hotel and changed out of my warm clothes. This is a good start!
As hotels go, staying at Sam sen sam is a great way to start a holiday. Friendly staff, beautiful lobby and pretty little rooms. The woman on the desk even showed me where I could get changed out of my jumper while we were waiting for the room to be ready. This was also the first taste we got of the 'no shoes' policy that is a very typical practise in Thailand. 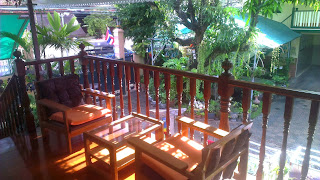 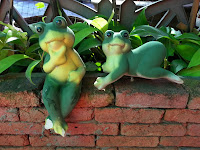 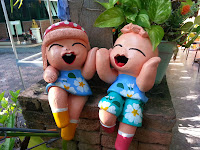 Wow! That's a small banana.
Breakfast time at Sam sen sam means toast, cooked breakfast, and fruit. All of this is pretty normal for a morning time, except for the bananas. These are the smallest bananas I have ever seen, and apparently a very common thing in Thailand. 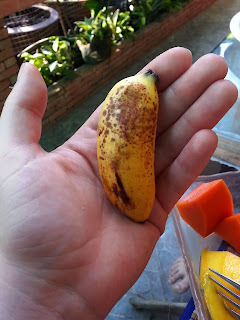 I feel guilty for being suspicious of everyone, especially as she was so nice!
When someone comes up to me whilst I'm on holiday, I always assume that they are trying to sell something. I'm a pale blonde girl in an Asian country. That just screams 'I'm a tourist. I'll buy anything'. So when someone comes up to us just to talk, it's a little unnerving. As we were wandering around Bangkok, we were approached in a park by a Thai lady, who literally just seemed to want to chat. She asked us questions about home and where we were heading, she told us a little about herself, and she told us some of the history of the park and the building we were looking at. Afterwards, she said bye and off she went. Being a suspicious person, especially on holiday, I still couldn't tell you if she was wanting to sell us something but we didn't say the right things, or if she was just a genuinely nice person. Either way, it was a pleasant experience that contributed positively to our first views of the country. 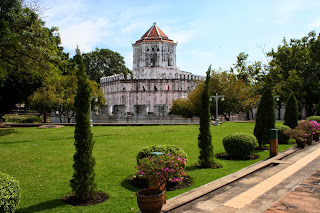 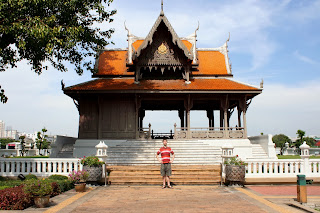 A tuk tuk driver just tried to scam us and (probably) sell us a suit or two. He was very pleasant though.
Day two in Bangkok, and we decided to go for a walk. After the park we headed along the river which was very peaceful away from the main roads (although there was a section that was full of reeds and various unknown objects!). We eventually found the road again and was approached by a tuk-tuk (taxi - see below) driver who, like the woman in the park, started talking to us about the local area. Unfortunately, this guy wasn't as selfless as our previous stranger. He was telling us all about the local events that were happening, about some great sights to see, and about the largest suit shop in Bangkok. This threw up alarm bells with me instantly, but he was nice so we continued to talk. We told him that we were off to see the Grand Palace and he quickly informed us that it doesn't open till 1pm, which was 2 hours away, and that he could take us to see all these places he had mentioned for only 40baht (about £1). Having read about the number of different scams that go on in Thailand, I didn't trust this. We politely declined and though he was still trying, he did stay pleasant to us at all times. Finally we managed to say goodbye and walk away. We continued to walk to the Palace and, surprise surprise, we found that is was open, thriving, and had been open since 8am. Nice try Mr driver! 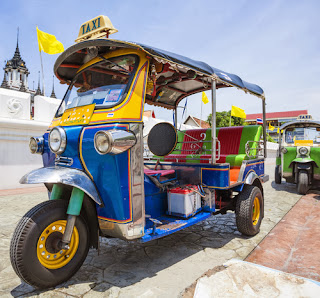 I am not appropriately dressed. Time some rent some clothes.
The Grand Palace in Bangkok is a royal building, and used to be the home of the King and royal family in Thailand. The King is a very important person in Thailand. Even saying anything bad against him or the monarchy is illegal, so obviously you must follow all of their rules. One of the rules of the Grand Palace is that you have to cover up. This means, no bare shoulders or legs, no tight clothing, and no wearing a number of other prohibited items of clothing which they deem inappropriate. In shorts and t-shirt, that mean't that Mike and I were not dressed suitably for the Palace. Luckily, they provide you with the right items of clothing to rent and wear during your visit. Not the most stylish of outfits, but this was certainly a new experience for us. 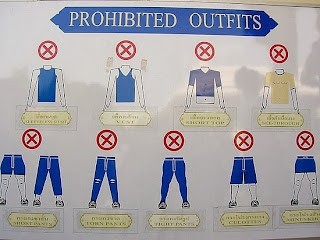 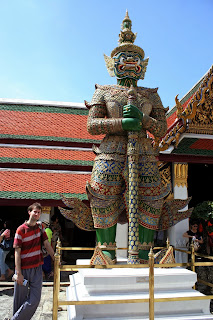 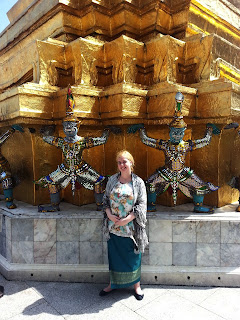 The Grand Palace is the shiniest thing I have ever seen. Beats Buckingham any day.
You can see how important the Royal family is here. Everything is colourful or gold or just shiny. You could see this place from miles away shining in the sunlight. Absolutely breathtaking. 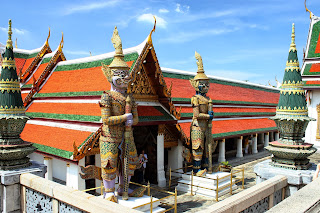 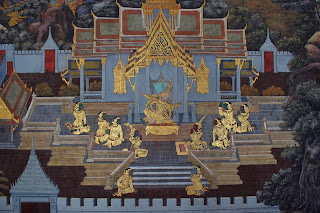 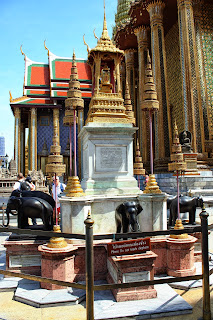 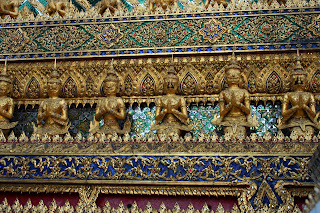 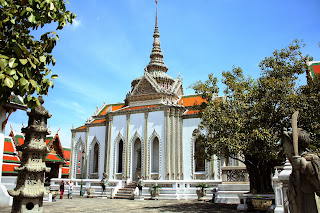 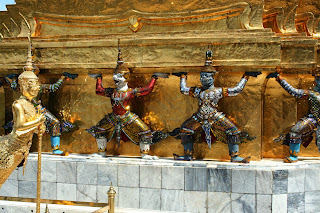 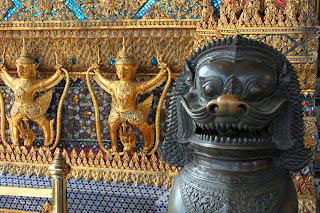 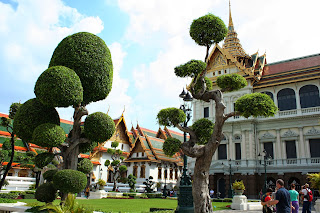 Thailand is a very Buddhist country, so there are Monks everywhere. Even though I knew this would be the case, I was still slightly surprised when I saw monks walking down the road holding a carrier bag or even just getting into a taxi. I guess I just excepted them to stay in temples all the time so it was strange to see them out and about in public. It was also strange to see how they are viewed in public too. They are like VIP's in Thailand. They get priority over anyone else, especially if they are travelling. In England you are expected to give your seat up to an old lady on a bus. In Thailand you must give it up for a Monk. 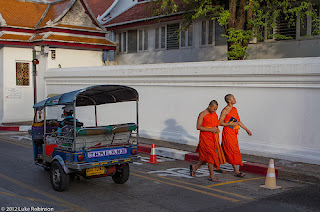 That is more than a lizard.
Each day on our way to Khao San Road we crossed a bridge over a river which was appeared to be the home of the biggest lizard thing I had ever seen. He was always there, swimming about or climbing up walls into a hole. Later we found out that this is a Water Monitor Lizard, and the Thai people hate them. They are apparently seen as being unlucky if you have one living in or near to your home, but personally, I thought he was gorgeous. 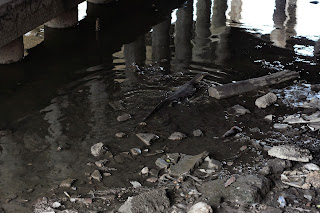 I take this place over Spain as a piss up destination any day.
So many people from England go to Spain for a drinking holiday but personally (if I could afford the flights) I would go to Khao San road in Bangkok. The atmosphere here is amazing and because it is full of travellers, many of which are solo travellers, everyone talks to everyone. I even overheard an American start a conversation with an Australian couple in a bar by buying them a drink because they were sharing one between them. The people are so friendly and although we didn't get to do a proper drinking night there, I can imagine that the night life is fantastic. 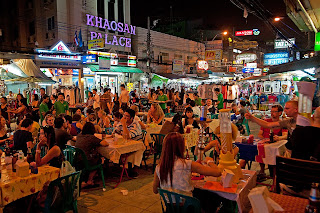 No, stranger. for the 41st time we do not want to buy a suit from you. It's 38 degrees!
Khao San Road. Home of foot massages, street food, awesome trousers, and of course, suit salesmen! Every few steps down the street there would be another salesman holding a book with pictures of suits in it and simply asking, 'suit?'. It didn't matter if he had seen us reject someone else. It didn't matter if he was in the middle of the street and he knew that we had already walked past, and denied, 15 other suit salesmen. He was going to ask if, in this hot weather, whether two tourists on a budget, who had limited space in their backpack, wanted to buy a 100 euro suit. Surprisingly the answer was no. Every single time. No. 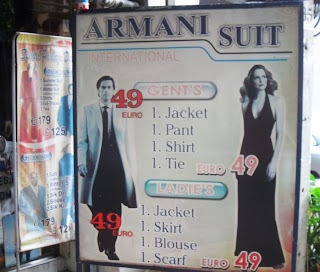 
I'm flying on a plane that looks like a duck. Awesome.
We left Bangkok and got on our first of the five internal flights we would take during this trip. Mae Sot was our destination and we flew there in the best style possible. On a little plane that was painted like a duck. There is nothing more to say. 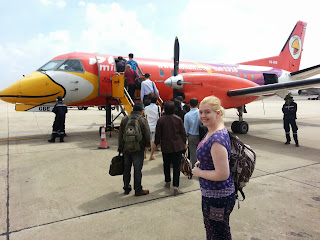