Wednesday was a memorable day. It's the first day that I have ever made an enemy in my 23 years on this earth. I almost felt like celebrating this rare and new occurrence.
Now I don't think that I'm a difficult person to get on with. I usually try to be nice to everyone and not offend people, but on this occasion he just took an instant dislike to me. I'm not sure that anything I could have done would have made a difference.

You're probably wondering who could possibly hate such a lovely girl. Okay, so you weren't thinking exactly that, but you get the point. Anyway, the creature in question, the evil being of this world, a squirrel! 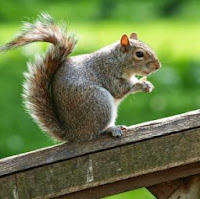 Yes, a grey squirrel. A common Sciurus carolinensis. There I was standing next to a tree, just innocently waiting for my ride home and updating my twitter status (of course), when my soon-to-be enemy ran straight passed me and up the tree.
I watched him run all the way up the tree. He ran up so high that nobody else could see him, making me look like a crazy person that was just staring up a tree. Anyway, he eventually went out of sight and I thought that was the end of our encounter. How wrong was I?

Around 10 minutes later he was back. He stood on the bark of the tree, staring at me. I stared back, and then it started. He hissed at me and made general squirrel noises towards me, rather aggressively. This was then followed by a lot of tail shaking and a very hostile stance (for a squirrel).

After leaving me slightly confused, he ran off back up the tree and out of sight. I attempted to find him but after 15 minutes I had no luck. That's when he decided to strike. The next thing I know, he's throwing conkers at me! Admittedly, there is a possibility that the conker just happened to fall on me, but still, I knew he was behind it. Four more conkers fell to the ground and the chaos stopped. He wasn't finished yet though. Back down the tree he came, shouting at me in his little squirrel language and shaking his tail.
A few minutes past and he got fed up and ran down the rest of the tree, across the grass and out of sight, leaving me confused about what I had done to upset him.

It only took me half an hour to get an enemy. I call him Samuel.